Attention all graduate and undergraduate students:

Fogelman College is proud to announce its Executive in Residence (EIR) program. This exclusive program brings business leaders into the business school to mentor business students. This is an extraordinary resource that will personally connect you with accomplished, seasoned industry professionals.

Our Executives in Residence are widely respected business practitioners who bring significant real-world business knowledge directly to you. These individuals represent a broad range of industries from the fields of finance and accounting, information systems, management, marketing, entrepreneurship, and more. Their contemporary perspectives will enrich your academic experience by expanding your career opportunities, business acumen and professional networks.

Bottom line, we want to bridge the gap between theory and practice. What better way to learn than by people who have done it themselves?

Most meetings will be held on a one-to-one basis, thus giving you the most meaningful experience tailored to your specific professional goals.

Discussions will typically focus on your interests, background and experience(s) as you consider a career in your chosen field.

Executives often advise students in areas such as:

|   Meet our Executives in Residence   | 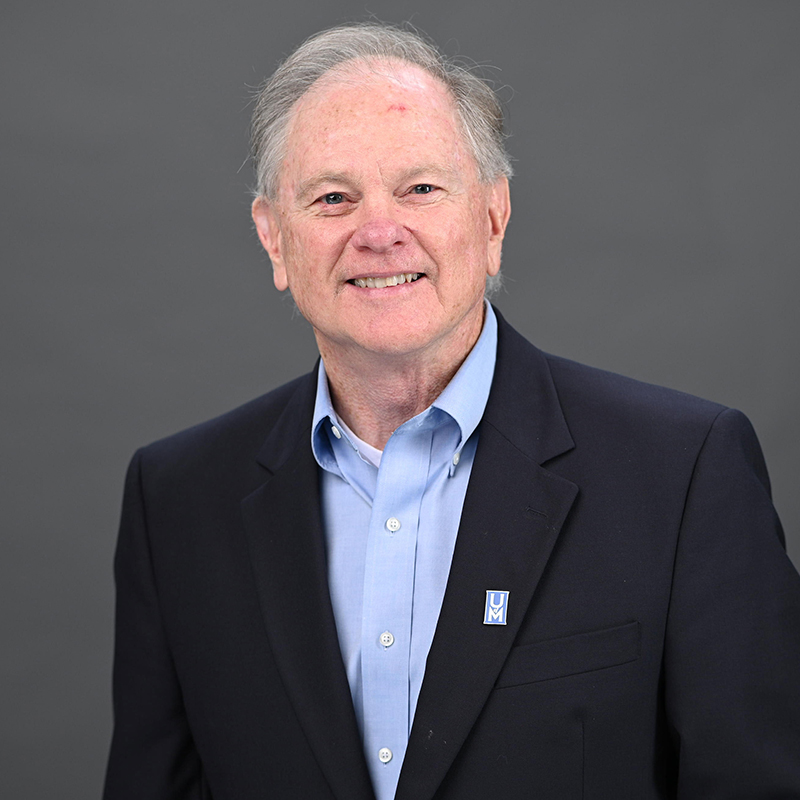 Frank Allen is a retired Financial Advisor, having worked at Shoemaker Financial Advisors from 2001 to 2021. Frank specialized in preparing financial plans and investment management for 300+ client households. From 1984 to 2001, he worked at FedEx in three different positions, as a Financial Analyst, Managing Director of Fleet Planning and Managing Director of Sales Support. From 1974 to 1984, Frank worked in accounting at Catherine's, a multi-state retail dress shop. He was also an Accounting Manager and later the Controller at Catherine's. 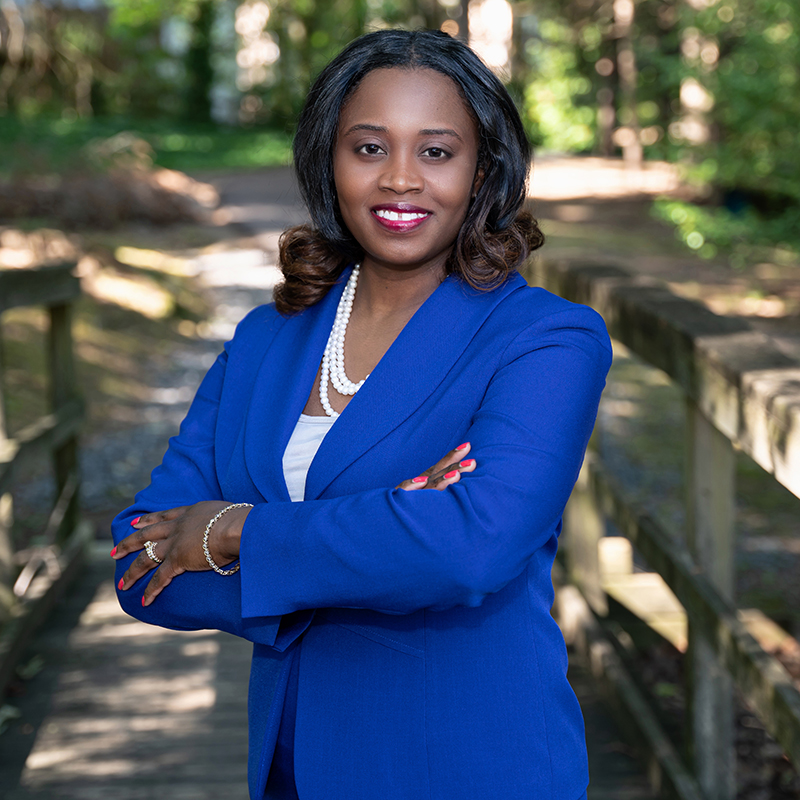 Trevia Chatman is President of Bank of America Memphis. As President, she is responsible for connecting banking and investment resources offered through the bank's eight lines of business to individuals, families, and companies across the region. She is responsible for executing Bank of America’s Environmental, Social and Governance strategy, to address social and economic concerns and drive impact for the community. Trevia is also the Market Executive for Memphis. In this role, she leads the development and execution of the market strategic plan, employee engagement and corporate reputation. She coordinates sponsorships, fosters collaboration with nonprofit leaders and stakeholders, and mobilizes her team of talented volunteers to drive positive change in the community. She is actively involved in the bank’s diversity and inclusion efforts as an Executive Sponsor for the Black Professional Group and member of Leadership, Education, Advocacy & Development for Women. She is a graduate of the bank’s Women’s Next Level Leadership Program and a recipient of the Bank of America Global Diversity and Inclusion award.

A passionate community advocate, Trevia is on the board of directors for the Women’s Foundation for a Greater Memphis, the United Way of the Mid-South’s Women United and a New Memphis Fellow. Trevia’s advocacy has garnered recognition including the Top 40 under 40 Urban Elite Professionals award, the Memphis Business Journal’s Top 40 under 40 award, MBJ Power 100 and the Memphis Grizzlies HBCU Empowerment award. She holds a Master of Business Administration degree from the Fogelman College of Business and Economics at the University of Memphis and a Bachelor of Business Administration degree from Tennessee State University. 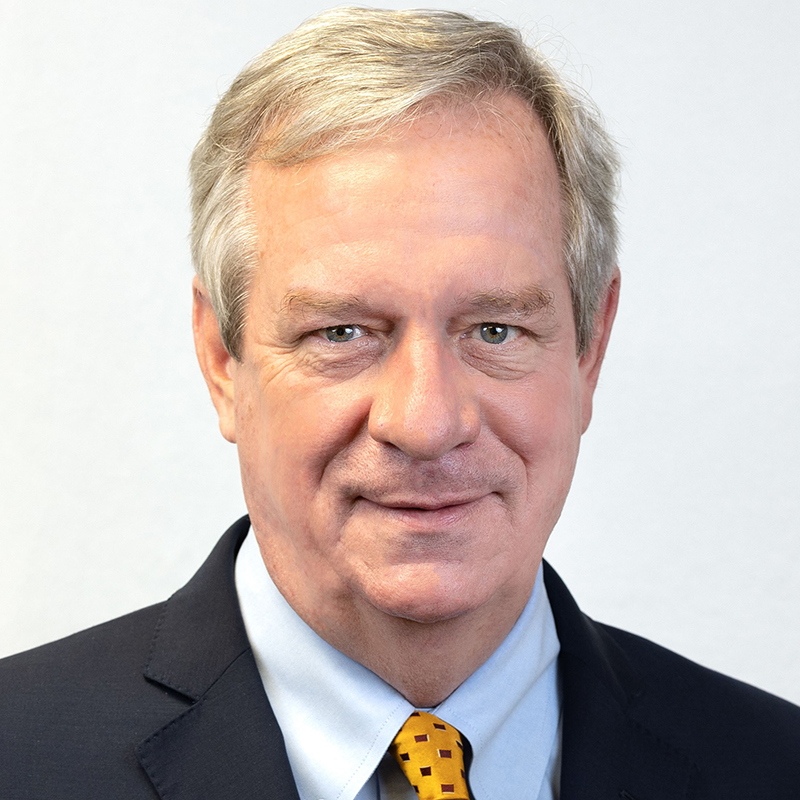 Steve most recently spent 20 years as an executive with Terminix International. He served in several roles including Chief Marketing Officer, Senior Vice President of Business Development and Vice President of Sales.

Steve is currently the president of Good Strategies LLC, a company that specializes in strategic planning, sales, marketing and communications planning and commercializing novel and emerging technologies to the pest control and lawn care industries.

Steve is a graduate of Fogelman College with a degree in economics. 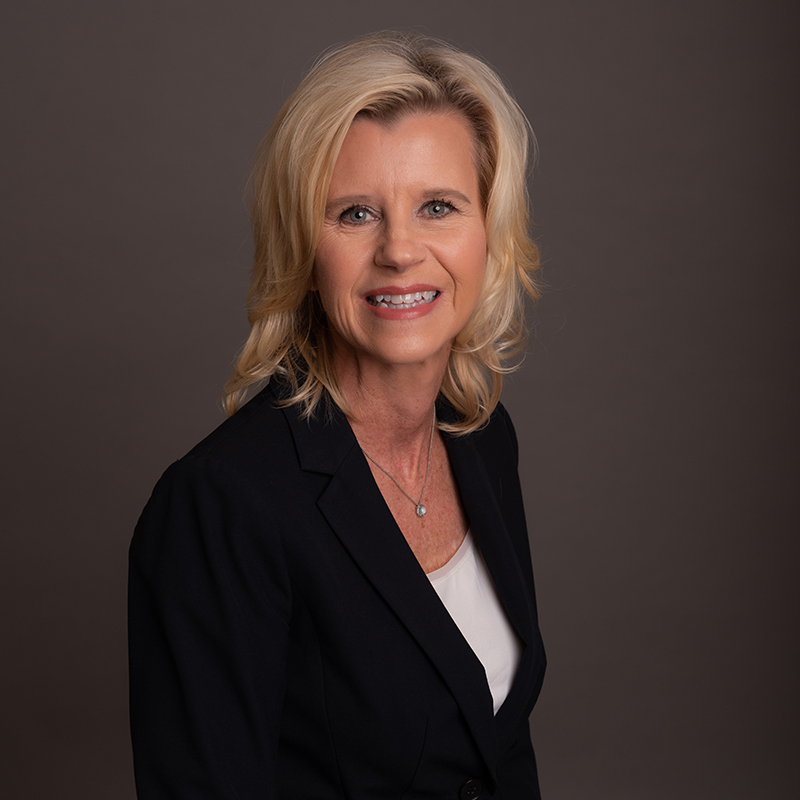 Dawn Graeter, President and CEO of Southern Security Federal Credit Union is an extremely accomplished, trailblazing finance executive who has led Southern Security to triple-digit growth since she took the helm in 2011. As one of the few female bank CEOs in the Greater Memphis area, Dawn has over 32 years in the finance and banking industry and has held almost every position there is as she worked her way from teller to CEO.

Dawn’s focus on the foundational pillars of people, community, and technology have ignited record breaking results year after year and includes specific efforts for teamwork-building, employee relations, a genuine grassroots community outreach effort, and adopting technology solutions to provide greater functionality and service to customers. These efforts have increased the Southern Security full-time workforce by 37 percent and increased the annual net income of Southern Security by 127 percent poising Southern Security for even greater growth in the future.

Dawn’s successes have not gone unnoticed as she was named a Superwoman in Business by the Memphis Business Journal in 2012 and was named University of Memphis Outstanding Alumna in 2019. Dawn and her team are proud that Southern Security has been named Best Credit Union by the readers of the Commercial Appeal for four years running and was recently named best Mortgage Company.

Recently, Dawn was asked to serve on the Le Bonheur National Leadership Council and The Carnival Memphis Board, both benefiting local children and children’s charities. Dawn previously served as chairman of the board for HopeWorks, an organization that offers jobs and support to the under-resourced and recently incarcerated working in conjunction with the Shelby County Department of Corrections Hope 2 Hire program. Her work with HopeWorks is what she is most proud of, helping train adults for vocational careers and life outside of the Department of Corrections system. Dawn has a real drive to help adults help themselves, to be able to provide for their families, and find a skill or career they are proud of every day. 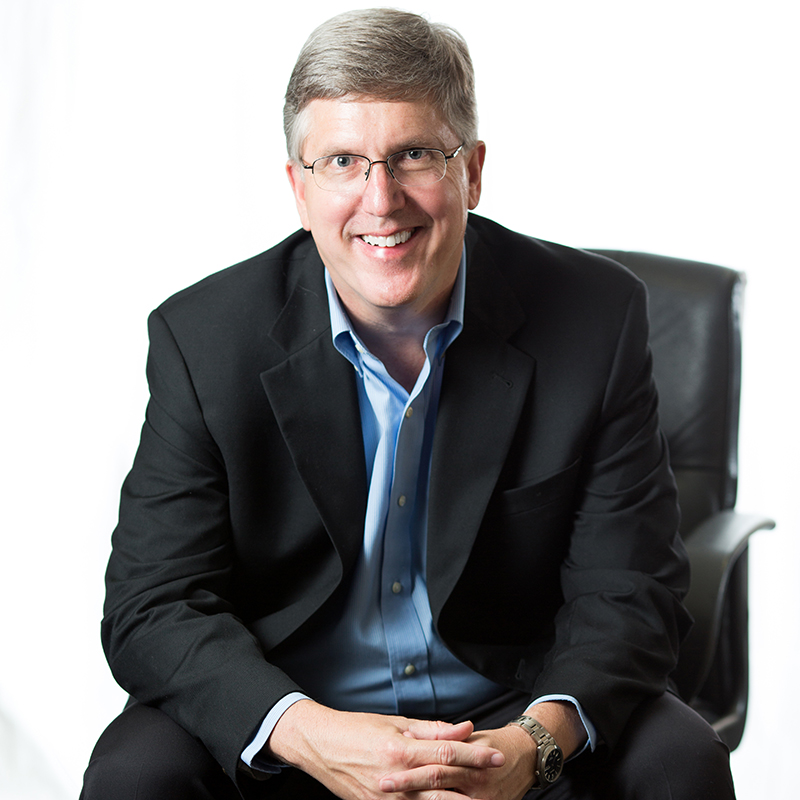 Jay B. Myers is the current president of JBM Enterprises and past founder/CEO of Interactive Solutions Inc. (ISI), a Memphis-based firm that specializes in video conferencing, distance learning, telemedicine, and audio-visual sales and support. Jay started ISI in 1996 and built it into a $25 million company with 55 employees and offices in Memphis, Nashville, Knoxville, and Little Rock.

In 2007, Jay published his first book, Keep Swinging: An Entrepreneur’s Story of Overcoming Adversity and Achieving Small Business Success and subsequently was presented the 2010 Ethan Award for success as an entrepreneurial author.

In 2014, Jay published his second book, Hitting the Curveballs: How Crisis Can Strengthen and Grow Your Business, in which he shares inspiring stories and practical tips based on growing ISI’s revenue from $11 million to $25 million during the Great Recession (2007–2011).

In June 2021, Jay published his third book, Rounding Third and Heading for Home: The Emotional Journey of Selling my Business and Lessons Learned Along the Way. 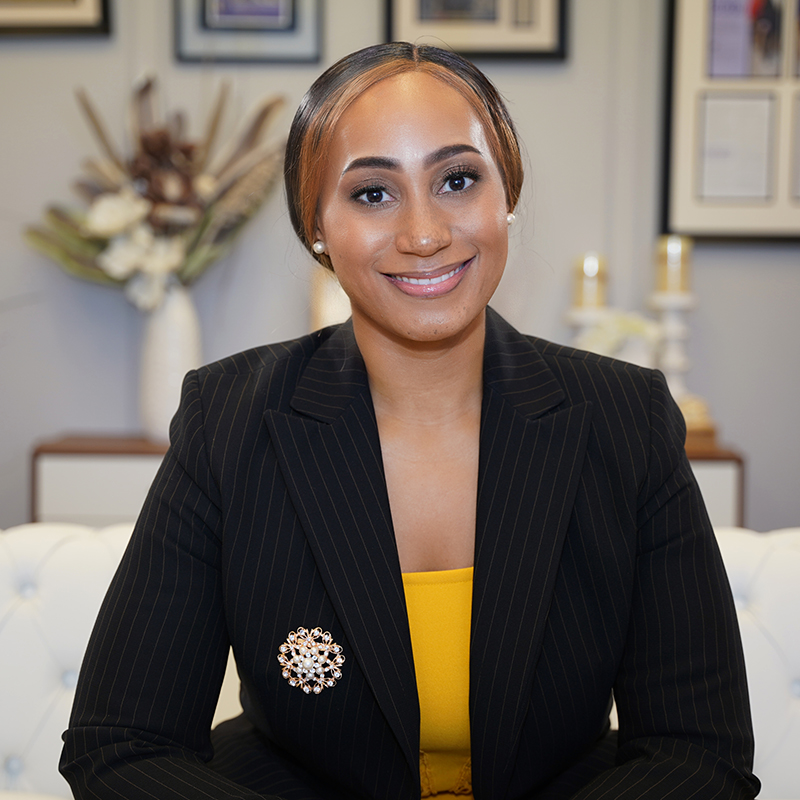 Her colleagues refer to her as the “Chief Change Officer” because she’s a visionary who continues to elevate the City of Memphis’s culture.

Alex regularly serves as a guest panelist and conference presenter for national and global audiences. She has been a featured participant in Netflix series “Real Talk.”
A firm believer in community service, Alex serves on the advisory council for 3SixtyInsights and the advisory board for Government Executive Media Group’s RouteFifty. She also serves on the board of directors for First8 Memphis, a non-profit committed to universal pre-k education in Memphis.

Before gaining her position as Chief HR Officer for the City of Memphis, Alex built a notable career serving in HR management roles for companies such as Brightstar Corporation, Target Corporation and Microsoft Corporation. 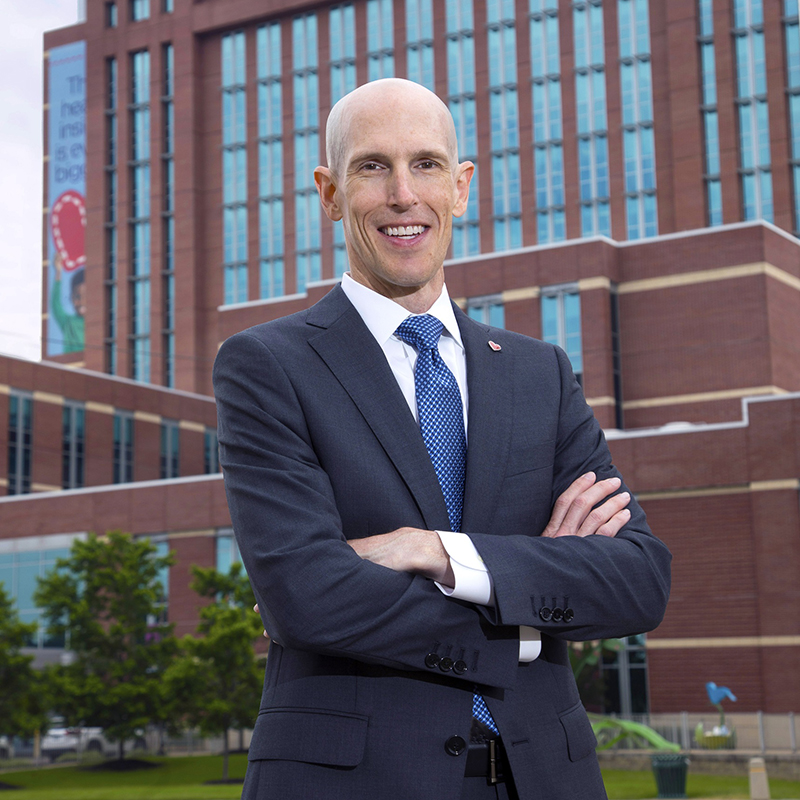 Under his leadership, Le Bonheur Children’s Hospital has earned recognition by the U.S. News & World Report as a Best Children’s Hospital for the twelfth consecutive year, received designation as a Level 1 Pediatric Trauma Center from the American College of Surgeons, broken ground on a $95.4 million expansion project and expanded Le Bonheur’s regional presence by opening a satellite hospital in Jackson, TN. Michael’s leadership focuses on continuing Le Bonheur’s history of improving the health status of children, delivering clinical excellence, training the next generation of pediatric experts and conducting research to advance knowledge in preventing, treating and curing childhood illness.

Michael holds both a Bachelor of Science in Quantitative Methods and a Master of Business Administration from the University of Alabama at Birmingham. He also earned a Master of Arts in Theological Studies from Rawlings School of Divinity and a Doctor of Business Administration from Liberty University. He holds a professional designation as a Fellow of the American College of Healthcare Executives. Michael also serves as Board Chair for the Children’s Hospital Alliance of Tennessee, where he works with healthcare leaders from across the state to improve the lives of all Tennessee children. 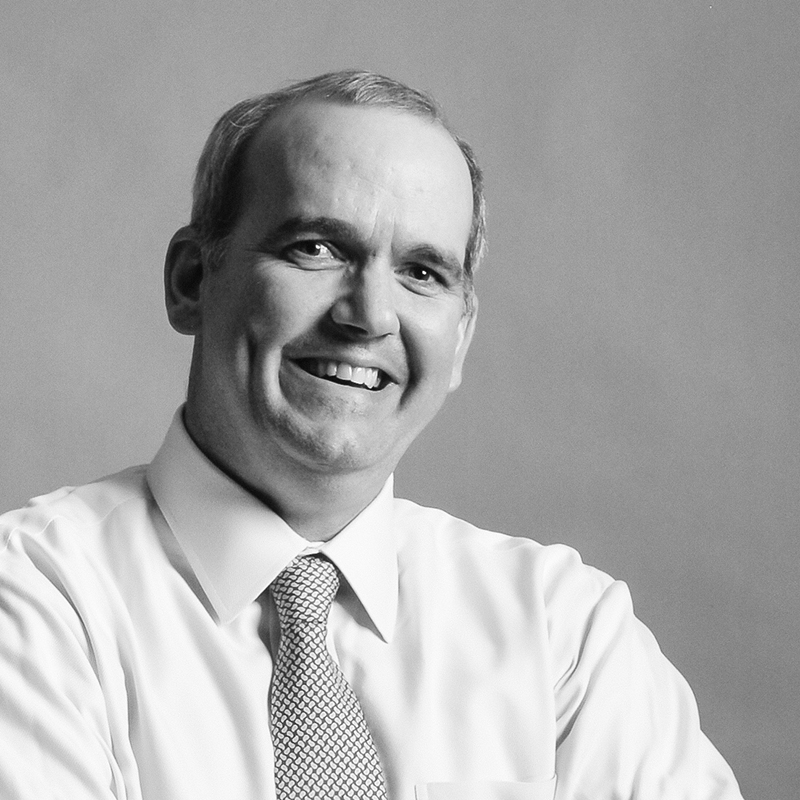 Duncan F. Williams is the President of Duncan-Williams, Inc. headquartered in Memphis, Tennessee. Duncan has been with the firm since 1993 and has served as President since 2000. Since its founding in 1969 as a municipal bond dealer, the Company has expanded to include sales, finance, and underwriting of all fixed-income securities to financial institutions and the general public. In 2021, Duncan-Williams, Inc. became a wholly owned subsidiary of SouthState Bank, N.A.

Duncan is the Founder, Chairman of Duncan Williams Asset Management (DWAM) established in 2015. DWAM is a local investment advisory firm approaching $1B in Assets-Under-Advisement that specializes in financial management for individual investors, businesses, and non-profit organizations. DWAM’s Mission Statement is: “Serve our Clients. Improve our community.”

Duncan is currently serving as Co-Vice Chair of the Greater Memphis Chamber of Commerce, previously served as Co-chair of its Chairman’s Circle and is still an active member of the Chairman’s Circle. He is currently serving on the Memphis Convention and Visitors Bureau Board, is a past Chairman of The Leadership Academy (New Memphis Institute) in Memphis, and still sits on their Board. Duncan serves as a member of St. Jude Children’s Research Hospital’s Professional Advisory Board. Duncan previously served on the Capital Campaign Committee of Shelby Farms. 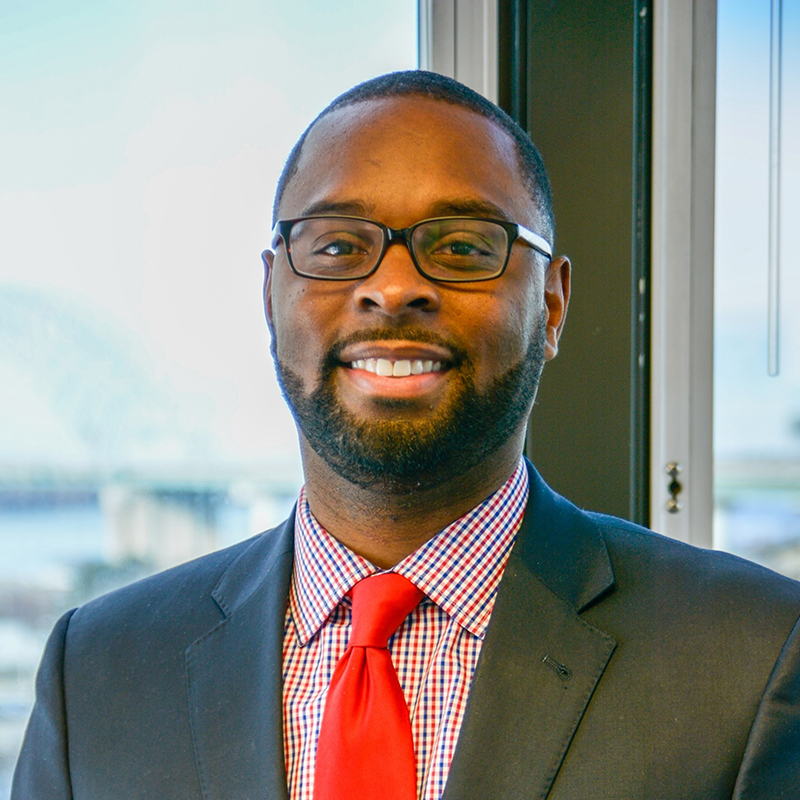 Paul A. Young currently serves as the President and CEO of the Downtown Memphis Commission (DMC), the organization tasked with economic and community development in the Central Business Improvement District. In this role, Paul leads the work to create a thriving and vital Downtown district that benefits the entire region. Paul’s passion for community service has been evident throughout his career. Before joining the DMC, he served as Director of the City of Memphis Division of Housing and Community Development (HCD), where he was responsible for furthering city-wide community development initiatives, including administering an annual budget of over $16 million from federal and local funding sources.

Before joining HCD, Paul served as Director of Legislative Affairs in the Mayor’s Office of Shelby County Government (TN). In this role, he was responsible for advocating the county’s interest to Federal and State Legislative delegations and local entities. He also served as the Administrator for the Memphis and Shelby County Office of Sustainability, which is charged with implementing a strategic framework for action on green initiatives in the City of Memphis and Shelby County.

We know it can be intimidating to meet face-to-face with renowned business leaders. Here are some tips to help make it a meaningful experience: 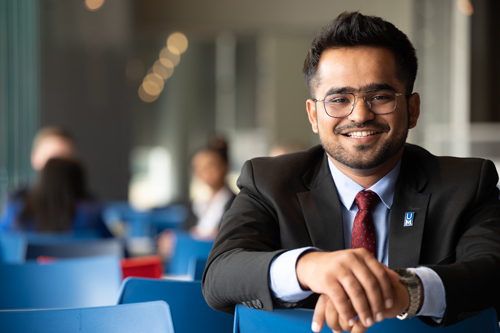 First and foremost, RELAX! The Executives are here for your benefit. They partner with us because they are committed to helping you. They want to learn about you and help coach you to your goals.

Preparation is key. Here are some tasks you can do before your meeting to help you get ready:

Introduce yourself at the beginning of the meeting to that the Executive gets a clear picture of who you are and what you want to accomplish.

Plan in advance questions you may ask as they pertain to your professional aspirations.

Lastly, upon conclusion of the meeting, send a follow-up thank you note. A quick email will suffice and will be greatly appreciated by our Executives all of whom generously volunteer their time. You may also send hand-written notes if you so choose.

If you are ready to take part in this exclusive and exciting opportunity, fill out your information here. We will be in touch shortly to connect you with your Executive in Residence of choice.